Michael’s life was a mess. At 30, he was a chain smoking high school dropout in a dead-end job, 70-pounds overweight, crippled by self-loathing and low-self esteem and using drugs and alcohol to numb his pain.

“Michael, why have you come to see me?” I asked, troubled by his heavy aura of despair.

“Michael, every life has worth; it’s how we live that makes our life worthwhile.” 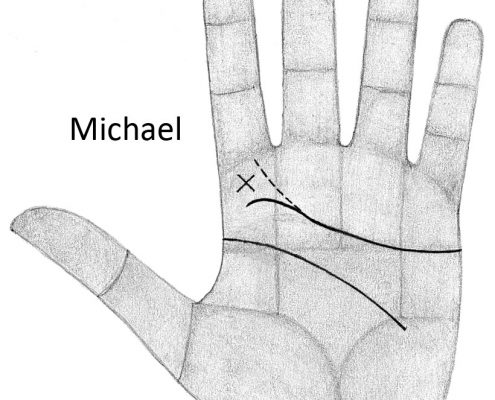 Michael’s handprints reflected his many troubles—but great potential as well. A beautiful magnetic cross on his mount of Jupiter indicated a deeply sensitive nature, a great potential for spirituality, a yearning to find a purpose in life and a strong desire for a loving relationship. Unfortunately, he was cut off from his Jupiter cross by a downward curving heart line, which was blocking him from loving others, loving himself and from loving life. His descending heart line told me he’d switched himself off emotionally and spiritually. Making matters worse, the downward heart line was disrupting his quadrangle, the space between the heart and head lines known as “the landing strip of the angels” that is a psychic energy zone directly linked to our chakras. When the quadrangle is balanced, our heart is open to the wisdom of spiritual teachers, learning important life lessons, interpreting visionary dreams and receiving heavenly blessings. Michael’s quadrangle was out of balance. His heart line was also marked with many lines of interference.

“These interference lines indicate emotional trauma at an early age, what can you tell me about that?” Michael confided that his father had been a demanding, authoritarian alcoholic who belittled him throughout his childhood. His father’s abusiveness led to his parents divorcing when he was barely into his teens. Michael hated his dad, blaming him for denying him love as a child and for the way his own life had turned out.

“Michael, you cannot blame your father for life . . . it was your choice to drop out of school and poison your body with toxins. Filling your heart with hatred stops you from loving anyone else—not even yourself. You have switched off your heart and can’t access the many wonderful things I see in your hand.”

I gave Michael several yoga and breathing exercises to practice, encouraging him to meditate every day. I also suggested he call his father.

“Be a caring son—let go of bitterness, judgement and resentment. Talk to him with unconditional love.”

Happily, Michael took my advice; a year later I barely recognized him. His eyes were bright and focused, he’d lost more than 50 pounds, had quit smoking, drinking and drugs and had enrolled in night school to “find his purpose”. His ongoing conversations with his dad had inspired his father to quit drinking and his parents were talking again after years of estrangement.

Michael’s interference lines were disappearing and his heart line was beginning to curve upward toward his Jupiter cross, mending his quadrangle. He had flipped the switch and opened his heart.

If you would like professional guidance regarding your love life, we’re here to help. Give us a call at 866-428-3799, or click here to book a consultation

Benjamin’s Story: From Heartbreak to Happiness