Blog
You are here: Home / Blog / Guylaine Vallée: Your Palmistry Coach / The Man in Golden Slippers - Part I 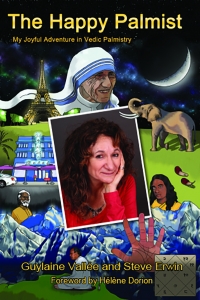 Excerpt from The Happy Palmist: My Joyful Adventure in Vedic Palmistry

On the morning of my appointment, I woke up with more excitement and enthusiasm than I had felt in months. Could this be the day I finally discover what I’ve been searching for?

I wore my most colorful clothes from Paris, including my electric blue leather pants that went so well with my bleached, pixie haircut. My outfit’s pièce de résistance was a transparent plastic purse with a huge plastic fish inside—a one-of-a-kind Paris original!

The Palmistry Center was across town in the Montreal neighborhood of Westmount and during the long ride on the Number 24 bus I thought of questions to ask the palmist, all of which I forgot the moment I arrived at 351 Victoria Avenue and saw the sign: The Birla Center for Hast Jyotish.

When I opened the door, an alarm chimed with the sound of songbirds, whose sweet singing followed me up the stairs into the reception area, fragrant with the soothing aroma of burning incense. I felt as though I had just climbed up to heaven.

A woman with long, black hair named Lydia met me in the lobby and led me to a sink, where she used a little rubber paint roller to coat my hands with black ink. She then pressed each of my palms onto a sheet of blank, white paper. And there they were: my handprints. I had no way of knowing that I was looking at my two new best friends—friends that held the secrets of my past, the path to my future and the key to unlock them both. When I saw my prints for the first time, I was shocked at how crooked my fingers were and how big my hands looked. I felt a little exposed, knowing that my hands—and all they might reveal about me—would soon be scrutinized by the eyes of an expert. 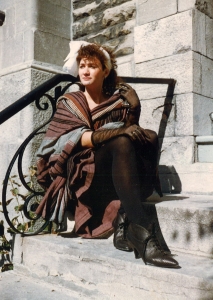 This is it, the moment of truth.

I washed the ink from my hands and sat down to wait for my reading. A few minutes later, Ghanshyam walked into the room. I was struck by how dignified he looked in his beige Nehru suit—and a pair of golden slippers! I was amazed someone could be confident and comfortable to wear slippers to work. He had a thin, black moustache and penetrating brown eyes that lit up like birthday candles as he welcomed me with a warm smile.

Oh my! He looks even more beautiful than before, I thought, feeling a powerful surge of déjà vu. Guylaine, don’t be silly! This is the first time you’ve ever seen him!

“Hello, hello, helloooo! It is so nice to meet you!” Ghanshyam said in a sweet, lilting East Indian accent. He took my hands in his and shook them with such genuine affection—it felt like a reunion with a long lost friend. He radiated with an honest-to-goodness kindness that put me instantly at ease.

I followed him into his office, which was dominated by an armoire filled with books about palmistry and astrology, many of them worn by age and use, bearing titles in languages I did not recognize. A large portrait of an Indian man wearing an orange robe hung above Ghanshyam’s desk. The man’s face was serene and his eyes were half-shut in a trance-like state. His arms were raised with open palms, as though he were bestowing a blessing upon me while I took my seat. 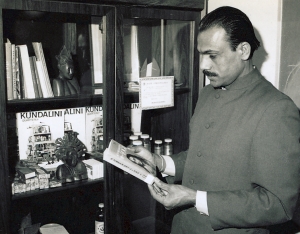 A translator joined us for the session, as Ghanshyam spoke no French and the extent of my English was “How are you today?” She informed me that Ghanshyam practiced Vedic palmistry, a form of traditional Indian palmistry that originated in the ancient Hindu scriptures known as the Vedas.

Ghanshyam placed the paper with my handprints on the desk, next to my astrological chart, which he had drawn up before my arrival. I had been unaware that astrology was related to palmistry, but I learned they are twin sciences and that hast jyotish is a phrase combining two Sanskrit words—hast, meaning hand, and jyotish, meaning light. So hast jyotish described the light from our planets being reflected in our hands.

After studying my chart and making all sorts of notes and scribbles on my prints with various colored pens, Ghanshyam looked up at me. His brown eyes shone with such intensity I felt he was staring into my soul.

“Let’s begin, shall we?” His voice had the tone of a compassionate doctor who had examined a patient’s X-rays and had both good and bad news to deliver.

“You are on a mission to find God and you have been on this quest for a long time,” he said, “but you haven’t made a spiritual connection. You’re miserable because you are stuck in one place and have no direction, which has made you feel lost and alone. You can’t decide what to do, and that has left you without any meaning or purpose in your life. Does that sound right to you?”

I was too overwhelmed to speak. He knew exactly what I had been feeling for the past decade—as if he had known me my entire life. I nodded.

He looked down at my prints and began pointing to various lines with his pen . . . 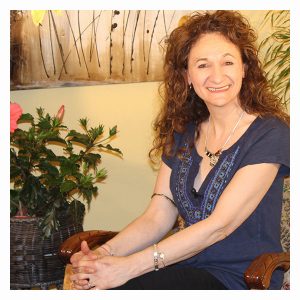 Guylaine Vallée is the author of The Happy Palmist: My Joyful Adventure in Vedic Palmistry, co-authored with Steve Erwin, award-winning journalist and author of The New York Times best-selling memoir Left to Tell.

Guylaine is the coach of the 90-Day Challenge programs.

And don’t miss Guylaine’s webisode every Wednesday on the Birla Center Facebook page.