Mary was a nervous wreck when she first came to see me. Despite having a degree in Television Production, she suffered from very low self-esteem and yearned for fulfillment. She was filled with restless energy, but had nowhere to direct it. Mary was desperate for something to make her feel good about herself, bring her happiness and give her life meaning.

During our first consultation she was convinced that romantically attaching herself to someone else would fill the void in her life. “Guylaine, I need a man—can you help me find a relationship?”

I looked at her handprint and shook my head. “Jumping into a relationship right now is not going to give you what you need to find lasting happiness,” I told her. 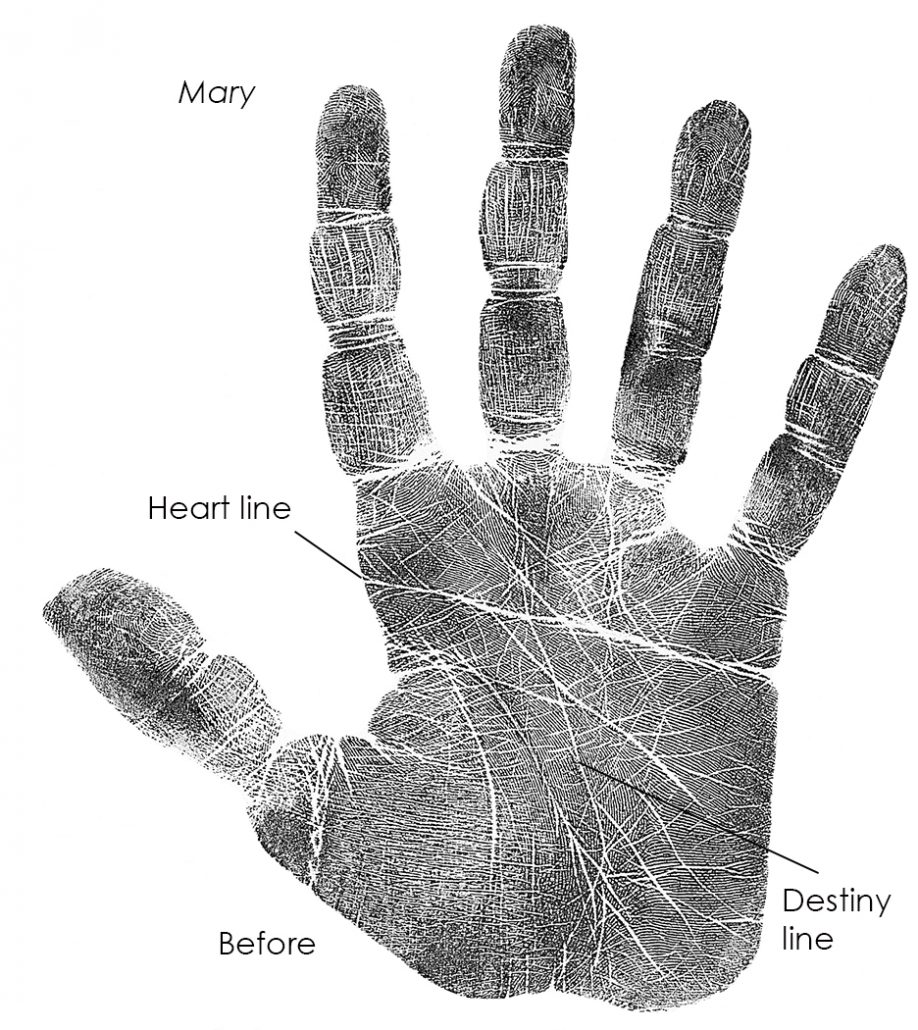 Mary had two very prominent lines in her palm—a long, ram-rod straight heart line as well as a long, beautifully developed destiny line. Her destiny line told me she would do very well in a career or by championing a cause where she could direct the energy of her passionate heart line.

“Mary, you need a purpose that is your own, a purpose through which you can take pride in your personal achievements. You are blessed with a powerful destiny line, pursuing a career will give you the purpose, which will help develop characteristics necessary to succeed in all areas of your life. Find work that satisfies you and then pour all your passion into it—that will give you a sense of accomplishment and meaning, build your self-confidence and make you self-reliant. When you are happy in yourself, you can be happy with someone else.”

Mary took that advice; the very next week she landed a mid-level job at a major television studio. From her first day, she dedicated all her energy to becoming the very best in her field. Her steely determination and the laser-sharp focus arising from her destiny line pushed her to the top in record time. She earned an executive position with a big salary, an expense account, a company car and a glamourous lifestyle that took her all over the world. She had found her purpose and was happy in her work and with her life.

However, when I called Mary a year later to check on her progress, I discovered that her new-found happiness was in jeopardy. One day as she was walking home from work someone caught her attention by whistling at her. She was extremely flattered and realized the man worked at her studio. David quickly became the center of her entire life. She began to neglect her work duties and became increasingly dependent on David—suffocating him with relentless demands for his attention and time. Mary’s successful, confident and dynamic personality, which initially drew David to her, disappeared in her growing obsession with him. Within that year her relationship was over, she’d been fired from her job, and was so despondent that she was contemplating suicide.

It was at this low point that she returned to see me for a follow up consultation, hoping I could help her figure out wha 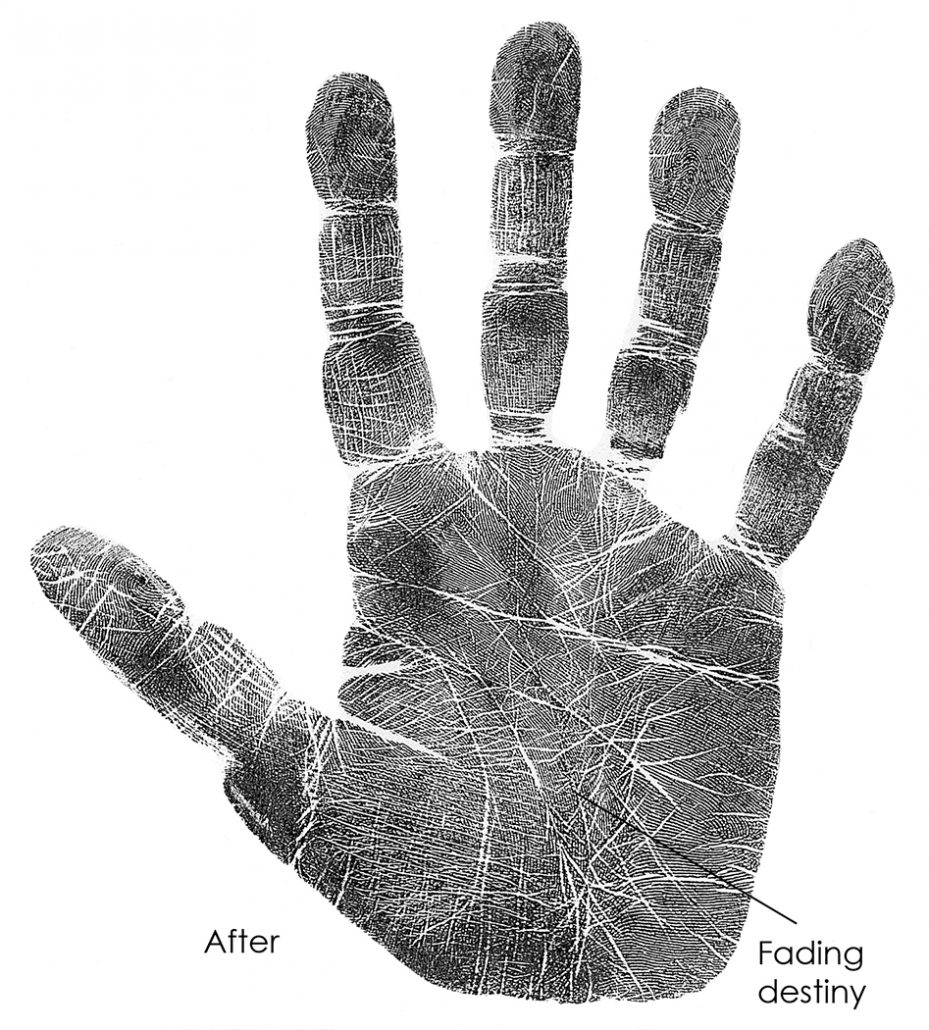 t went so wrong with her seemingly perfect life.

As you can see in her “after” handprint, Mary’s line of Destiny has vanished completely—losing sight of her purpose had, at least temporarily, cost her everything—her job, her relationship and her sense of self. Over a series of coaching sessions, she came to realize that losing one’s purpose and depending on others for happiness leads only to thwarted desire, anger and despair. If we are lucky enough to have a purpose—be it a career, a cause or a belief—we must nurture it or we will lose it. In Mary’s case, losing her purpose almost cost her her life.

Mary eventually rebuilt her career by producing documentaries that had strong social messages. Her new work firmly connected her to her passion and to others, which made her heart line more flexible. When she did begin a new romantic partnership, she was prepared and capable of balancing both a loving relationship with nurturing her drive to succeed professionally. Her heart line began to turn upward and her destiny line began growing again.

My personal palmistry coaching program focuses on the issues blocking you from happiness and fulfillment: from eliminating self-defeating attitudes to developing confidence, charisma attracting love or building a successful career. Whether your goals are short-term or long-range, I’d be delighted to help you achieve them. Together we can change your life as we change the lines in your hand.