Blog
You are here: Home / Blog / Guylaine Vallée: Your Palmistry Coach / Changing our Destiny through Love and Forgiveness

Charles came to see me not long after being betrayed by the person he most loved and trusted.

“How could my own father do this to me, Guylaine? How could he stab me in the back?”

Charles came from a long line of successful entrepreneurs and his family owned and operated factories in both Canada and the United States. As the only son, he had groomed him from an early age to take a leading role in the business. Shortly after earning his MBA, his dad made Charles a senior vice president in charge of operations.

It was a role Charles accepted enthusiastically and with gratitude. He’d never been happier, and within months had introduced new business models and technical innovations that dramatically boosted both productivity and profits. However, instead of being proud of his son, Charles’s father felt threatened—he fired Charles and replaced him with Charles’s younger sister.

“I will never, ever forgive my father for what he’s done to me—not as long as I live. He betrayed me, humiliated me and ruined my career. Who will hire someone whose been fired by his own dad?” Charles said. He was trembling with rage as I took his first set of handprints.

I saw that his destiny line was quite short and unpronounced—suggesting that something was blocking him from achieving his life’s purpose. I suspected that “something” was the bitterness he held toward his father.

I prepared Charles’s Vedic birth chart to get a clearer picture of what was going on between him and his father. 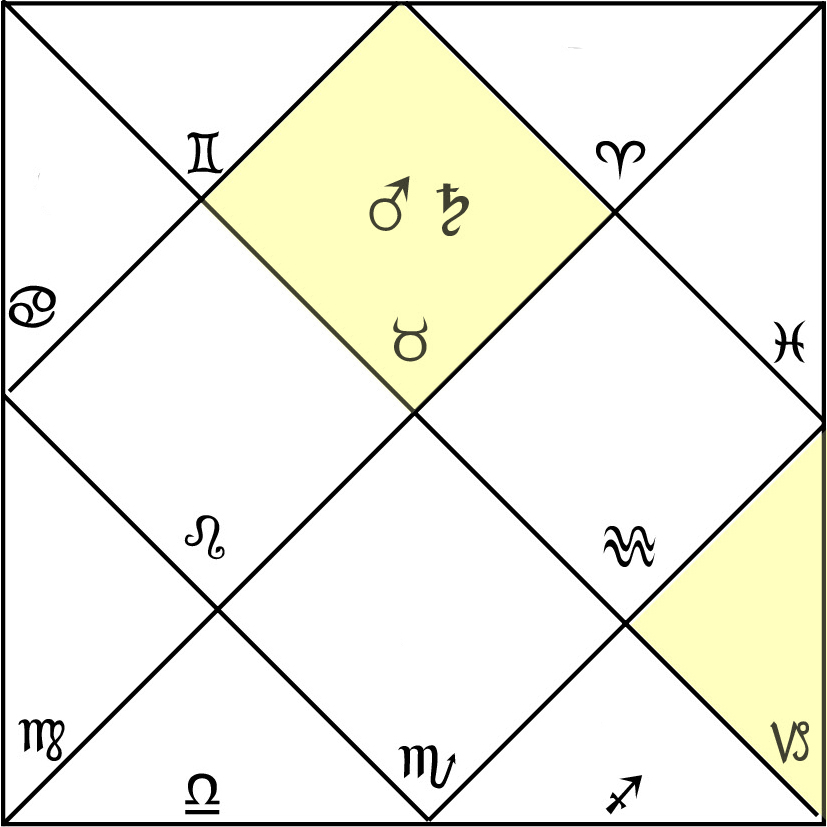 “Look at this, Charles,” I said, pointing to his Ninth House. “The Ninth house reflects both our good fortune and our relationship with the important teachers and mentors in our lives—beginning with our fathers. Saturn rules your Ninth House and, luckily, Saturn is in Taurus in your First House. This is very auspicious because it brings all the good fortune of the Ninth House into your First House, the house that symbolizes our personality and purpose in life. But Saturn is also the planet that assigns us deep, and sometimes very difficult, spiritual lessons. Because Saturn is in your First House, relating to the Ninth House of father, your chart is telling me that your father has a big role to play in your life, and in your spiritual development.”

Charles looked at me blankly, then said. “My father is dead to me—I will never forgive him and never let him play a role in my life.”

The vehemence of his statement didn’t surprise me; in addition to Saturn, Charles had Mars—an enemy of Saturn—in his First House, which helped explain the rift between father and son. He had Taurus—the stubborn bull—in his First House as well, contributing to his inflexible attitude.

I sighed. “Listen Charles, the lines in our hands, and the planets in our chart do not seal our fate—they are tools we can use to shape and improve our future. Your hand and chart tell me that your father has a lot to teach you about life, and about yourself—it’s up to you to open yourself to those lessons.

“I can’t be open to him—not after the pain he’s caused me,” Charles said resolutely.

“Your father’s actions and attitudes are his karma, which he will have to deal with . . . your karma will largely be determined by how you react to the way he’s treated you. I suggest you try to understand him, love him and forgive him. It is the only way for you to move forward in life—focusing on what he did or didn’t do to you will only lead to more anger and frustration.”

“I don’t think I can get past this,” Charles said, but agreed to come back for a series of coaching sessions. Over the course of two years I persuaded him to begin a regular meditation practice and take up yoga. This helped him delve deeply into his own heart and perceive what was truly important and good in himself and others. Eventually he let go of his resentment toward his father, found a great job, fell in love and began raising children of his own.

“I finally saw that my intense desire to prove myself in business was likely triggered my father’s actions,” Charles told me during our last session. “Once I took responsibility for my own actions, I was able to understand and forgive his . . . to open myself to love and to get on with my life. You were right, Guylaine—my dad has played a great role in my life. He has taught me how to love and forgive, and that put me on the path to happiness.” 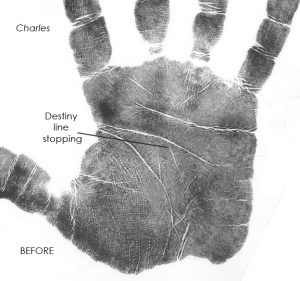 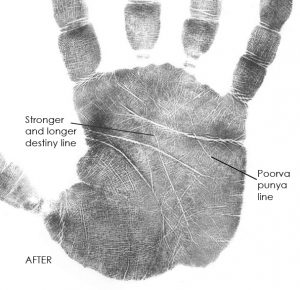 Years later, after his sister secretly sold her share of the business, Charles’s father lost control of his company and was fired by the new owners. He came to see Charles complaining about his daughter’s betrayal, claiming that he couldn’t understand, and would never forgive her or get over his anger. Charles comforted and counseled his dad with love and kindness, inviting him and his sister to family dinners every week, ultimately making peace between them and reuniting the family.

Charles’ final set of handprints reflected the great changes in his attitude, outlook and life. His destiny line had become stronger and longer—telling me that he had found, and was happily following, his true purpose. He had also developed a rare poorva punya line, one of the most auspicious signs in palmistry, signifying that he had gained great fortune as a result of virtuous deeds.

My personal palmistry coaching program can help you remove negative thought patterns or habits that stand between you and happiness. Call 866-428-3799 today, or click here to book a consultation or design a personal coaching program with me. We are here to help.

All Hail the Devoted Warrior