Millions of people are about to have their world plunged into darkness, and they couldn’t be happier! On August 21st, a total solar eclipse will blot out the Sun and engulf much of North America in near or complete darkness—it will be three hours of midnight in the middle of the morning or afternoon depending on your location! 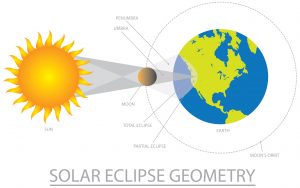 A total solar eclipse happens when the Moon passes between the Sun and Earth and blocks all or part of the Sun’s light, an astronomical event that is as rare as it is spectacular. Eclipses occur near the lunar nodes – Rahu, the north node, and Ketu, the south node – the points where the Moon crosses the ecliptic. On August 21, the Sun, Moon and north node are in conjunction in the sign Leo.

The last total solar eclipse to span the entire width of North America took place a century ago, so it is little wonder that countless scientists and millions of amateur stargazers have been eagerly anticipating this big celestial blackout for decades. Telescope sales are through the roof, eclipse festivals have been planned in many key-viewing locations and solar-tourism has become a booming business. The best vantage points to take in the full “totality” of the eclipse are found along the 100-kilometer-wide elliptical path stretching across the United States from Oregon to North Carolina, but the eclipse can be witnessed from practically anywhere on the continent.

This could be a once-in-a-lifetime opportunity to behold one of the Cosmos’ greatest shows, so if you don’t want to miss it, go online to learn when and where you can best catch this phenomenal occurrence, as well as how to view it safely without damaging your eyesight!

From an Eastern Perspective

While many Western astronomers are over-the-moon with excitement at the chance to witnesses August’s total solar eclipse, Vedic astrologers have a more tempered and cautions approach. In Vedic astrology eclipses, particularly solar eclipses, are regarded as powerful (often tumultuous or even earth-shattering) portents of both personal and world events. The illuminating light of the Sun is obscured by the passage of the Moon, frequently casting deep shadows across our awareness. This can wreak havoc on the powerful flow of creative and karmic energy those nodes exert on our lives. Most Vedic astrologers advise against beginning any major project, signing contracts, entering or ending a romance, or making any other significant life decisions in the days leading up to, during, and following an eclipse, be it lunar or solar—the energy is just too shadowy, unpredictable and potentially unstable!

Vedically speaking, the best course of action to follow during an eclipse period is to look inward, centering and calming your energies though meditation and peaceful self-reflection. This advice applies doubly this month because we have both a solar and lunar eclipse. In India, at this time, it is also considered auspicious to do charitable acts. 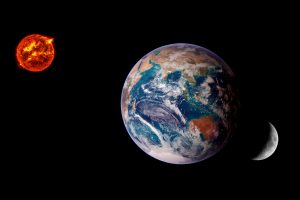 A partial lunar eclipse will occur on August 7th, two weeks before the solar eclipse. This occurs when the Sun, Earth and Moon are very closely aligned with the Earth in the middle. In this case, the Sun is in Cancer opposed by a full Moon in Capricorn. Emotions can reach a peak of intensity, either heightening our intuition and creativity or causing us to react and lose our composure. Additionally, the proximity of Ketu, the Moon’s node, to the Moon, relating to our past karma, forces us to take stock of any emotional issues that took place during the last six months. So this period can be used as a time of reflection to resolve and reset our emotions and move towards the future with a more spiritual understanding of where we have been and where we would like to go.

During this eclipse month, it is best to remain peaceful and objective, and not let any emotions overshadow our good judgment. We would be well-served by taking some quiet time to tune in and pay heed to the “small still voice within”—to follow the wisdom of our heart. We can satisfy our ambitions at this time, but make sure, due to the obstruction of the light of these two powerful luminaries – the Sun and Moon – that we use our discernment wisely; otherwise we can affect the happiness of those close to us.

Find out how the solar and lunar eclipses are affecting your natal chart and your life. Book an appointment now and we will help you make the most of your planets until the next series of lunar eclipses begins early next year.

No planet possesses a greater ability to fundamentally change our life and the way we view the world than Saturn. Why? Because Saturn takes it’s time—it is the slowest of the planets and shapes long, even generational stretches of our individual lifetimes. For this reason Saturn is known as the Lord of Karma as well as the planet of transformation. Spending 2 ½ years in each sign of the zodiac, and taking 28 ½ years to travel through all 12 astrological houses, Saturn’s impact on our existence and our birth chart is profound and long lasting—it touches every aspect of our being.

At the moment and for several weeks, the entire world is experiencing the unsettling effects of Saturn in retrograde—the slow-moving, Karmic powerhouse of a planet is currently traveling back and forth between Sagittarius and Scorpio while transiting the chaotic energy of the Galactic Center. This may have you feeling at loose ends, like the teacher has left the classroom and no one is enforcing the rules. While potentially confusing and stressful, this can also be a period of great opportunity—a real chance to harness that transformative energy and make some truly positive and long-term changes in your life.

We can help you make the right choices during this period of intense transformation. Make the most of Saturn Retrograde! Call us at 866-428-3799 from Canada or the U.S. You can reach us from anywhere in the world by calling: 1-819-428-4298, or click here. We are here to help!

This Sunday, July 9th beginning at 12:06 am, is a very special and auspicious day in Vedic culture known as Guru Purnima, which always falls on the day of the full moon (Purnima) in the Hindu month of Ashadha (June–July). This year the full moon is in Sagittarius opposite the Sun in Gemini.

Guru Purnima is celebrated in sacred memory of the great sage Vyasa, the ancient Guru who compiled the four Vedas and wrote the Mahabharata, often referred to as the Hindu Bible. Guru Purnima is also celebrated by Buddhists in the honor of Gautama Buddha to commemorate the day when he gave his first sermon. It is a day dedicated to honoring our teachers and Gurus with pujas—prayers, devotional ceremonies and rituals of homage and reverence.

The Sanskrit word "Guru" is translated as "dispeller of darkness." Hence, the Guru dispels the darkness of ignorance and sets us on the path to enlightenment. Guru Purnima is not only a day when seekers of enlightenment offer their Guru gratitude, but also a day to receive that Guru’s blessings.

Not all of us in the West have Gurus, but that does not make this day any less significant. Guru Purnima is a day for acknowledging and venerating whatever belief, philosophy or teaching we hold dear to our heart. It is an excellent occasion to set time aside to meditate and offer prayers of gratitude to everyone and everything that helps us grow in body, mind and spirit, and to reaffirm our commitment to seeking truth and wisdom. If you have yet to embrace an intellectual or spiritual discipline, Guru Purnima is a perfect day to search for one.

The full moon of Guru Purnima is a period of high, positive energy that hugely magnifies the benefits and rewards of meditation, prayer and acts of devotion and gratitude. So on Sunday, let’s make a special effort to be thankful to all the teachers and guardian angels in our lives, and be joyful knowing that they will return our appreciation many times over with countless blessings.