Blog
You are here: Home / Blog / Palmistry / From the Case Files / The Double Destiny of Dr. O

Dr. O was an opinionated, no-nonsense physician whose motto at work and at home was: “It’s my way or the highway”. His attitude had won him few friends and alienated his colleagues. Despite his brashness, he’d been acknowledged as one of the finest surgeons in the country until a recent skiing accident damaged his wrists and left him incapable of operating. All the specialist told him the damage couldn’t be repaired.

He reluctantly agreed to see me at the insistence of his wife, a regular client of mine who was a doctor of non-traditional medicine. She had long complained about her husband’s stubborn closed-mindedness and unwillingness to try new things. Since the accident, she’d pleaded with him constantly to seek alternative therapy for his injuries and to help his overall outlook. He steadfastly refused and the marriage was quickly deteriorating.

“My wife says I’ve become bitter and mean-spirited,” he complained. “What does she expect? I can’t work, I can’t even hold a scalpel—my career is over.” 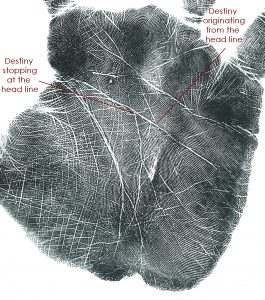 Dr. O’s handprints revealed why he was an excellent surgeon. His long, unbending head line stretched into the hand’s great energy center of Mars positive, giving him the drive, strength of mind and cool nerves to perform with grace under pressure. And his passion and dedication were evident in his strong destiny line, but the destiny line ended abruptly at his head line, confirming the sudden break in his career.

A destiny line ending at the head line indicates there is something wrong with our way of thinking, which disrupts our destiny—our purpose in life. When the head line is properly used, we think constructively and our destiny will continue uninterrupted regardless of mishap or setback. A destiny-head line disruption can be a staggering blow to our self-confidence and sense of identity, as well as damaging our personal relationships and financial well-being.

I suspected the rigidity of Dr. O’s head line had interfered with his destiny—his inflexible thinking fully manifested following the stress of his accident, sending him into a downward spiral. Fortunately, there were two potentially helpful features in Dr. O’s handprints. Foremost was a second, overlapping destiny line above the head line suggesting that, after a period of self-reflection and the adoption of a more positive attitude, Dr. O was capable of continuing his career. Secondly, a square on the original destiny line where it broke at the headline meant he had to ability to be receptive to new ideas and to accept the support and advice of friends and family. I was certain that successfully guiding him in this direction would improve his situation.

“Dr. O, your wife has urged you to see an alternative practitioner. . . why not swallow your pride and take her advice? Look at it this way: You have nothing to lose and everything to gain.”

Thankfully, Dr. O took my recommendation. He began an alternative therapy program and adhered to it religiously. One year later he returned to my office.

“Great news, Ghanshyam! I’ve resumed my hospital duties. My wrists are healed; I’m operating even better than before!” he told me. Even better, he said, he was making friends for the first time—his colleagues loved his new-found openness to their ideas.

“The only person happier than I am is my wife,” Dr. O smiled. “She keeps asking me what I did with her husband!”

Do you need guidance to re-establish your priorities or sense of purpose? Give us a call at 866-428-3799, or click here to book a consultation. We’re here to help.

Gentlemen, Start Your Engines! The Dynamic Transit of Mars in Aries: February...