Steve and Lyn: Moving from Anger to Laughter

Steve was a big, burly owner of a fleet of moving vans who had no patience for palmistry. When we started our first session he wanted to be any place other than in my office watching me analyze his handprints.

“I’m only here because my wife made me come. There is nothing wrong with me—she might buy into this palmistry silliness, but I don’t,” he said, folding his tattooed-arms across his chest defensively.

“I understand,” I said, smiling. “Palmistry isn’t everybody’s cup of tea.” I also understood that his wife, Lyn, a long time client of mine, was fed up living with Steve’s demanding nature, short-temper, and overall miserable outlook on life. He was no longer the thoughtful, happy man she’d married 20 years earlier. She’d had enough and had given him an ultimatum—go see Guylaine or pack your bags. Despite his surliness, the fact that he was sitting across from me told me he loved Lyn and was desperate to save his marriage.

“Steve, you say you are only here because your wife insisted—so let’s talk about your relationship with her.” At first he was reluctant to discuss his personal life, but as he described how he and Lyn met and fell in love his macho exterior began to melt. Steve slowly let down his guard and his eyes filled with tears as he shared his fears about losing his wife.

“I don’t know what’s wrong with me,” he blurted out. “I get so impatient and annoyed whenever she asks me to do something with her. I know she’s just trying to bring us closer together . . . but I’m afraid that if I don’t do what she wants she’ll leave me. That fear makes me even angrier and I end up pushing her further away. I know I’m acting poorly by not doing what she wants to, but I can’t seem to help myself.” 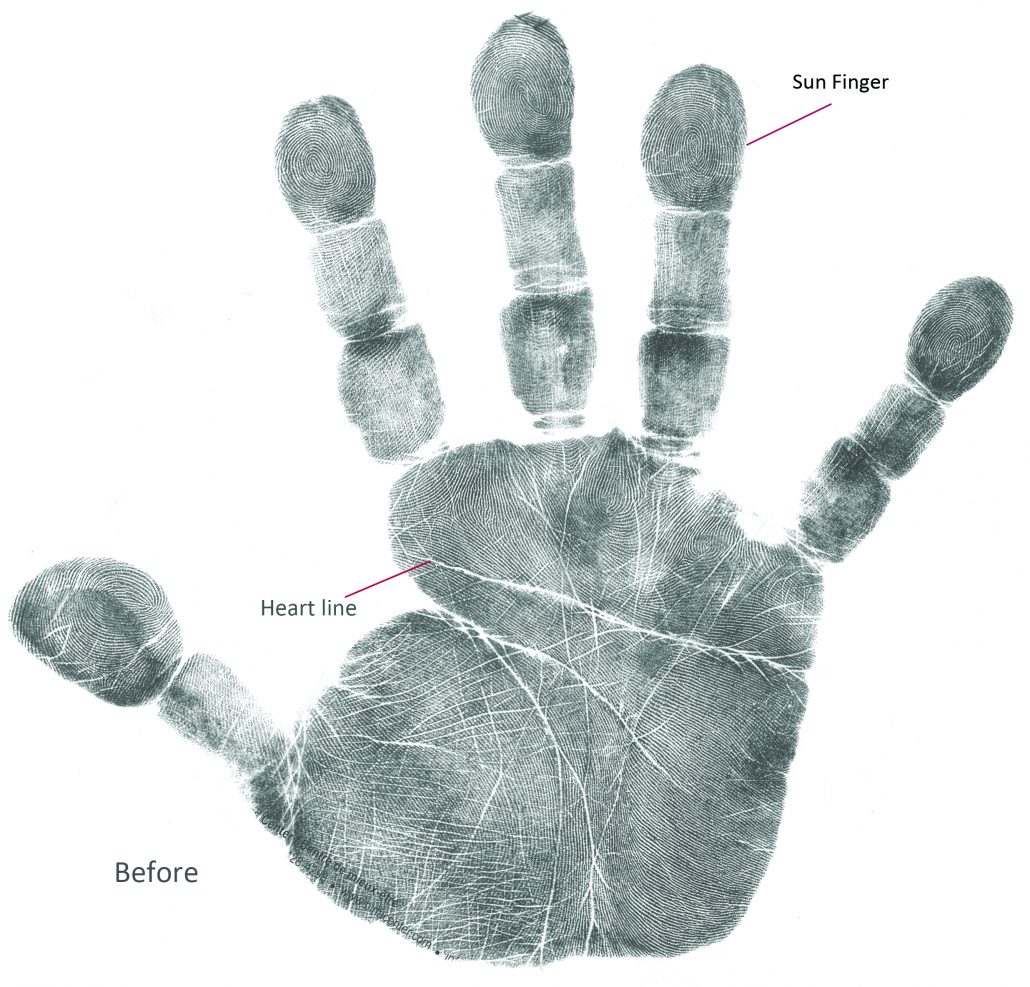 Steve’s handprints confirmed what he was telling me. His heart line was particularly revealing—it was long and as straight as a ruler. While the line’s length suggested he was idealistic and capable of loving deeply, its rigidity rendered him incapable of compromising or accepting others for who they truly were. He became agitated when people didn’t see things his way, which made him intense and unyielding—a bad combination if he hoped to maintain a long-term, harmonious relationship. He simply couldn’t respond to the needs and feelings of his partner. His unhappy situation was made all the worse by his closed Sun finger, which drained him of his natural magnetism and prevented him from experiencing joy in life and love.

Fortunately, Steve’s hand also possessed several wisdom marks on his Jupiter mount that, although they were faint, told me he was capable of change and personal growth. By the end of that first session he said he was willing to do whatever it took to change his attitude and develop a rounder, more flexible heart line. I gave him a journal and asked him to keep a record of every experience that triggered an angry outburst.

Within the first few weeks Steve was shocked to observe that he became upset during most personal interactions. “It’s not just with Lyn—it’s with everyone—I yell at my employees if they are 30 seconds late coming back from lunch, at the guy in front of me who’s driving too slow, at the waiter when he’s not quick enough with my order, at Lyn if she wants to watch a comedy show instead of the hockey game . . . everything and everyone seems to aggravate me! I’ve almost filled this journal and there is only one day that I felt happy! Why am I always so angry?

I answered by quoting the great Eastern sage, Sri Yukteswar, who said that wrath springs only from thwarted desires—that if we choose to love, our love must be unconditional. Otherwise our relationships are based on satisfying our own desires and we will inevitably be disappointed when our needs aren’t fulfilled. That clicked with Steve; he agreed to start another journal—this time writing down a note of forgiveness to everyone with whom he lost his temper. The next time we met he was angry with himself. 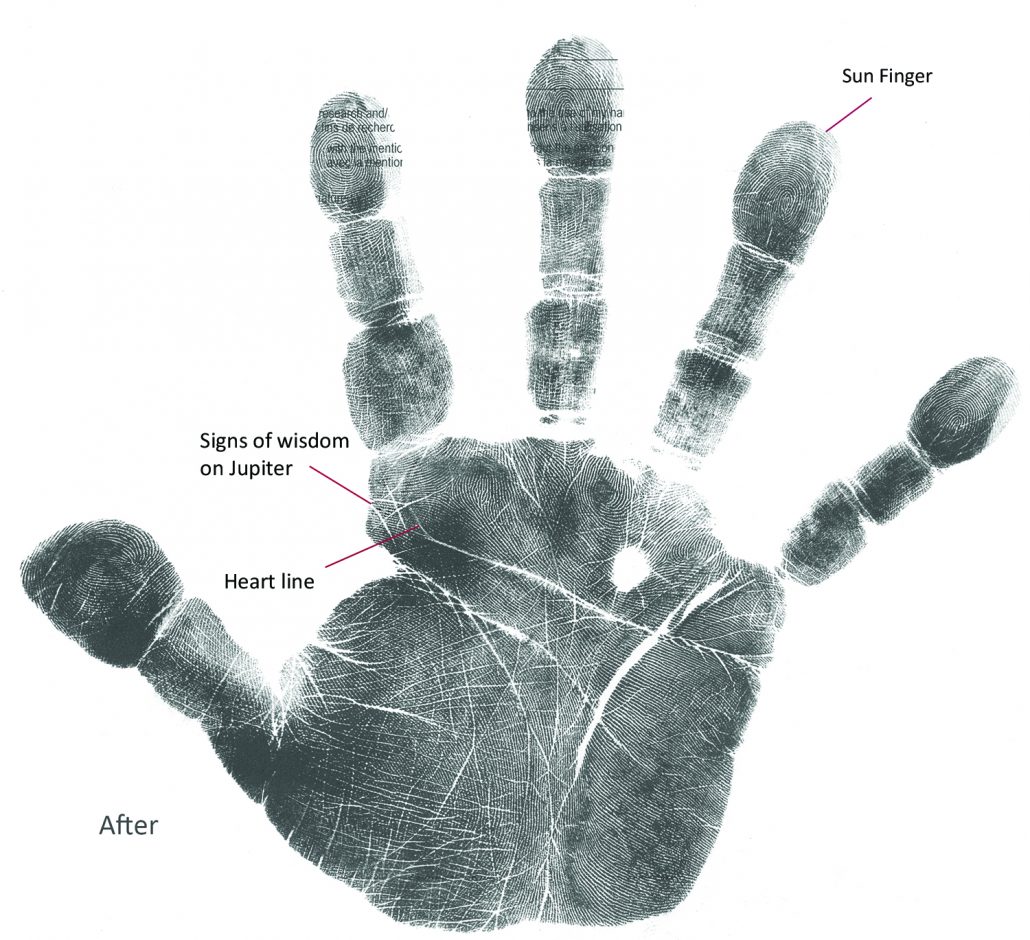 “Look at all these forgiveness notes. I can’t stand myself, who would want to live with someone so miserable and mad at the world?” This insight was a major breakthrough for Steve, whose next step was forgiving himself for putting so many demands and expectations on others.

A year later Steve and I met for our final coaching session. This time Lyn joined us and my office was filled with laughter as we took another set of Steve’s hand prints. His heart line had changed as much as his attitude—it was much rounder and far more flexible. And now the marks of wisdom on his Jupiter mount were more prominent and his Sun finger had opened up, inviting joy to return to his life.

Lyn confided that Steve had undergone a dynamic transformation—his anger had evaporated and he was more patient, caring and attentive to her needs. They had drawn closer as a couple and, most importantly, they were both happy.

“Thank you for giving me back the man I married,” Lyn whispered as they left.

My personal palmistry coaching program will focus on the issues blocking you from happiness and fulfillment. We will look at how to eliminate self-defeating attitudes, develop confidence and charisma, attract love, strengthen your relationships or build a successful career. Whether your goals are short-term or long-range, I’d be delighted to help you achieve them. Together we can change your life as we change the lines in your hand.

Call 866-428-3799 today or click here to book a consultation or coaching program with me. We are here to help.

Give the Gift of Wellness this Christmas! Happy Holidays!