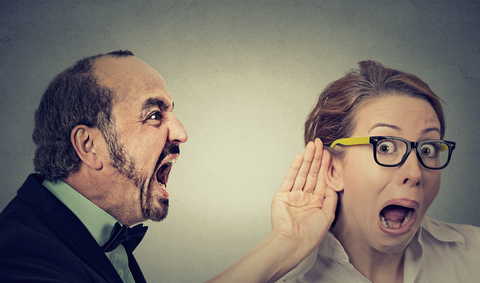 “She says I don’t hear a word she says,” Mateo blurted out, as he stepped into my office with his girlfriend, Mercedes. “But really, it’s her who doesn’t listen to hear me. I told her palmistry can’t help our relationship, but she went ahead and bought the plane tickets and dragged me here yet again.”

“He doesn’t hear me, Ghanshyam,” Mercedes said. “And I don’t think he sees me, either. We’ve been together for five years and I feel invisible to him.”

I first met Mercedes who, ironically, was a best-selling author of books on love and relationships, in 1996 at a symposium on Ayurvedic healing in her hometown of Los Angeles. She’d been travelling to Canada twice a year ever since for a consultation. Usually she came alone, but the year before she had brought along Mateo to help them solve their communication problem.

“When I saw you last year you both agreed to be more open with each other’s feelings. What happened?” I asked.

“I’ll tell you what happened,” Mateo jumped in. “A few months ago we went to a spiritual retreat and as soon as we walked in she was mobbed by her book fans. A huge, handsome guy who looked like a Swedish tennis pro elbowed me aside to tell her how much her books meant to him and his wife. Mercedes didn’t even acknowledge I was there. I felt two-feet-tall while she soaked up this guy’s praise. She should have known how I felt. I can’t get past that feeling of being ignored and treated like I’m unwanted.”

“Does that explain what happened after the retreat when we went for a romantic dinner at our hotel?” Mercedes countered. “Our waitress blatantly flirted with you right in front of me, and you encouraged it by winking and smiling at her. She was practically sitting in your lap and you loved it! You looked like you wanted to take her up to our room and jump into bed with her. How can I trust you when you invite women to come on to you?”

“Can I help it if she found me attractive, Mercedes?”

“No, but why do you have to flirt with other women when you have me?”

“Okay, you two,” I said. “Let’s calm down and see what your handprints can tell us.” 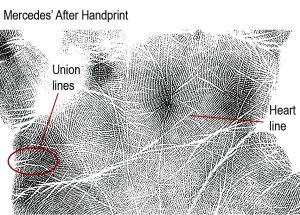 I compared Mercedes’s current handprints with the ones from the year before and saw that her heart line hadn’t changed in either her right hand (reflecting her conscious mind because she was right-handed) or in her left hand, relating to her subconscious. This meant her affection for Mateo had remained constant. However, a series of lines paralleling her union (marriage) line had formed in her subconscious hand and the union line itself was now turning downward. These were clear indications of a growing emotional separation from Mateo, which could soon lead to an actually separation. 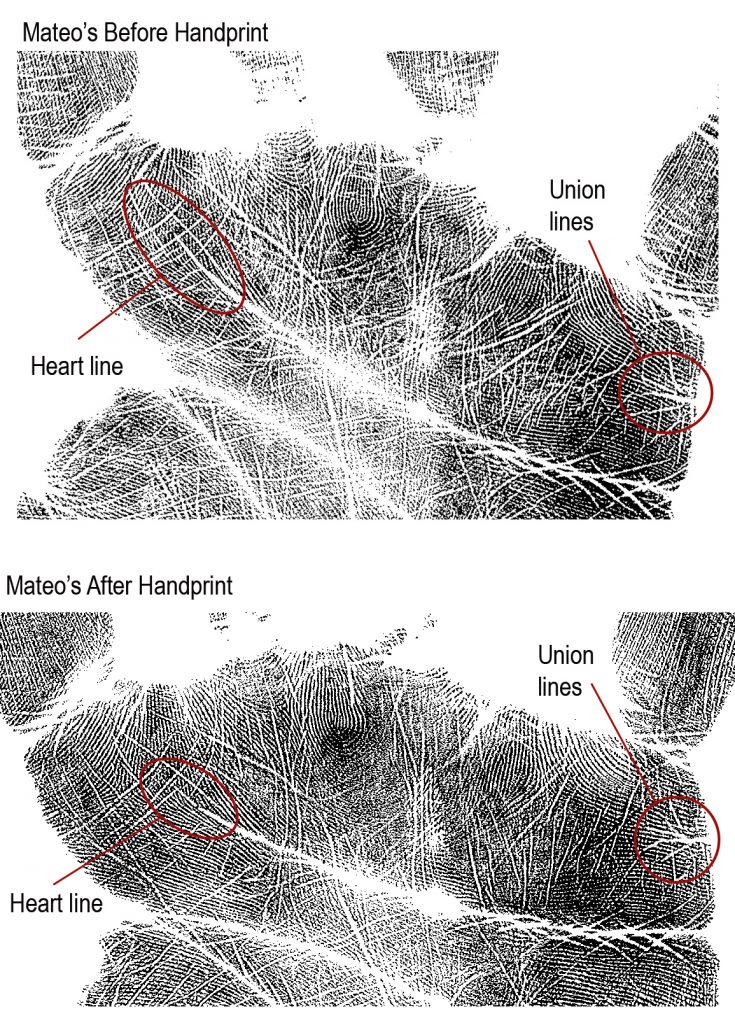 Mateo’s handprints from a year ago revealed a multitude of parallel union lines in both hands, and those lines were just as pronounced in the new prints. Most worrisome was that the long, solid heart line from the previous year originating in his idealistic Jupiter mount had changed in the new handprints—it had shrunk and was now broken in two.

“Mercedes, your parallel union lines are reactionary—they have formed because you sense Mateo is shutting you out, making you feel insecure and distant from him. But Mateo, your parallel union lines have been there for years, they have been present in many, if not in all of your past relationships. Your idealistic heart line tells me that you put your partners on a pedestal and you feel let down and unwanted when they don’t live up to your unrealistically high expectations of them. That’s when you subconsciously begin looking for a new relationship, hoping it will fulfil your fantasy. But it is a fantasy you will never fulfill because the women you love are real people with their own lives, goals and personalities. They cannot be everything you want them to be in the kitchen, in the bedroom and in public.

“At the spiritual retreat, Mercedes was being appreciative and receptive to her fans and admirers—you could have chosen to be proud of this and let her enjoy the attention, but you took it as a slight. Your broken and shrinking heart line indicates your ideal image of Mercedes is broken and subconsciously you are pulling away from her in search of another ‘ideal’ woman. If you don’t fix this now, your relationship is heading toward disaster. Both of you have down-turning union lines—that is destiny’s way of bringing you together to work out your issues. It’s up to you to do the work.”

I half expected Mateo to storm out of my office, but he didn’t. Instead he took Mercedes’s hand in his own and said: “Ghanshyam, I don’t like what you’ve said, but I have to admit that you just described my entire history with women. I suddenly understand why all my relationships ended unhappily. This relationship is going to be different.”

He turned to Mercedes and said, “From now on I am not only going to listen to everything you say to me, I’m going to hear you. And I guess I was wrong, palmistry can help our relationship.”

As they left my office, Mercedes looked back at me, smiled and whispered: “Thank you.”

Open the lines of communication with your partner or spouse—palmistry can show you how. To book a consultation, give us a call at 866-428-3799 or click here. We are here to help.

Did you find the story of Mercedes and Mateo helpful? Leave us your comments!